Two presentations were made. The first by Danny Rice, the Regional VP of Sales for the Florida market; the second by Wayne D’Amico, the Executive Vice President of Corporate Development & Strategic Relations. Also in attendance were Francisco Jaramillo and Ana Isabel Besu, Directors of Client Services and Sales, and Peter Morris, Director of Analytics.

Xceligent is a leading provider of commercial real estate information across the United States. Their research team pro-actively collects:

One of the main questions posed was: How does Exceligent differentiate itself from Costar.  The response included:


Xceligent, a leading provider of commercial real estate information, makes a powerful entrance into the Miami market as the sole challenger to Co-Star.

This event was coordinated by FIU / Hollo School and REAAC, the alumnus association.

It was sponsored by The Jerome Bain Institute and RESA.

This was primarily for students who are going through the FIU real estate program.  They met various Realtors, and other professionals in the real estate business who explained the benefits of their respective professional designations to the students.

CCIM had its own table in the large meeting hall.  The format was round tables with the students moving from table to table every 15 minutes in groups to hear about each group in a "speed dating" format.  It worked great and there are many students interested in attending the CCIM Monthly Meetings and joining the Miami-Dade District.  In addition to the real estate majors, there are other students majoring in finance, management and/or accounting and grad school students also attended.

It was a great event for FIU Hollo School of Real Estate, CCIM Miami-Dade and related real estate professional organizations.

Posted by Brittex at 2:48 PM No comments:

Listen to Britt's interview on 880 The Biz w Jim Fried

Britt J. Rosen CCIM, the Miami-Dade District President, appeared on Fried on Business at 6PM on 880AM, a regular Thursday radio show located in Miami, FL.

CCIM Miami-Dade & 880 TheBiz have a partnership that promotes CCIM at the same time invites the public and other commercial real estate practitioners to join us for the many events we have throughout the year.

Monthly meetings are held at Morton's Steakhouse in Coral Gables at noon.  There are also networking events and in January is the annual Outlook Conference at the Coral Gables Country Club.

The next chapter meeting is September 9th at Mortons.

Click here to for the event calendar for more info.

On the 8th of July 2016, the CCIM Miami-Dade-Monroe District hosted its monthly meeting at Morton’s Steakhouse in Coral Gables.

There were two key presentations: The first was by John Dohm, CCIM, SIOR, of Infinity Commercial Real Estate who is a highly-respected commercial broker nationwide. Dohm is a past regional director of SIOR and CCIM chapter president, past president of the Realtor's Commercial Alliance, and is currently Chairman of the Board of the Miami Association of Realtors. http://www.realcommercialproperties.com/

The second was by John Guitar of All Aboard Florida AllAboardFlorida.com Guitar is the Senior Vice President of Business Development for All Aboard Florida. He is responsible for the development and leasing activities for the stations and transit oriented development in Miami, Fort Lauderdale and West Palm Beach. 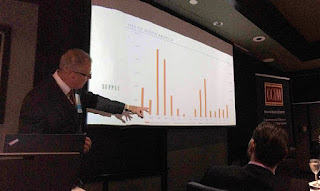 “The only thing Miami cannot mess up is geography” – John Dohm

Immigration: According to the U.S Census Bureau, in 2013 there were 1.3 million people living in Miami-Dade County who were born outside of the United States. 1.2 million were from Latin America.

International Real Estate Sales: 50% of all International sales in the entire state of Florida are from Miami and Ft. Lauderdale.

Miami International Airport: In 2015 there were 44.3 million passengers.

PortMiami: In 2015, PortMiami posted an increase of 15% in containerized cargo movements.
PortMiami is the closest U.S. port to the Panama Canal.

Train Transportation. All Aboard Florida is developing Brightline, an express, intercity train service arriving 2017. It will connect the tri-county area of Miami-Dade, Broward and West Palm bringing a total of 4 million square feet of new transit oriented development around the South Florida stations.

And what does this all mean for the commercial real estate world? In London, the number of square meters $1 million USD can buy of prime residential real estate is 22. In New York, it is 27. As Miami becomes a more globalized city, its prices will become more “globalized” as well.

On the 10th of June 2016, it was back to Morton’s Steakhouse in Coral Gables for the CCIM Miami-Dade-Monroe District monthly luncheon.

For the third consecutive month there was a sold-out crowd that included CCIM designees, CCIM candidates, lawyers, investors, sponsors, and many guests. The special talk of the day was on the Art of Negotiation by Tom Dixon, from Dixon Commercial Real Estate. He has been a resident of Miami for more than 40 years. His career began as an appraiser and transitioned into commercial brokerage and tax assessment. He is a past President of MAR (Miami Association of Realtors) and on the CIASF Board of Directors.

“The more the back and forth the stronger it is.”
Tom Dixon

The first stage of negotiation is “Preparation”, where one must know the difference between position and interest.  A position is a specific solution that is not flexible. An interest is a desire that may be satisfied in several ways.

Mr. Dixon gave the example of an orange. Imagine two buyers who are looking for an orange. They both need an orange, which is their position. Unfortunately, there is only one orange, so one party wins and the other party loses.

Not so fast. What if we were to probe for the hidden reason, their interest, for their respective position? The first buyer needs an orange because her grandfather is sick and wants to make him orange juice; the second buyer needs an orange because the zest will give flavor to his cooking; their position is the same, both need an orange, but their interest is different. Hence, a creative approach to negotiation can actually produce a win/win situation.

Mr. Dixon went on to name some famous gambits of negotiation:


The second stage of negotiation is “Action”. The strategy here is to have the other side make the first offer. Start with a high goal because the higher you aim the better you will come out. Also, remember the three F’s to avoid disagreement:

The final stage of negotiation is “Agreement”. In this stage one must have an agreement in mind and be willing to walk away and walk back. If a deadlock is reached, one should seek common ground on a personal level and offer minor concessions; but don’t make a concession without getting something in return.

“When you give people what they want, they’ll give you what you want.”
Dr. Chester L. Karrass

Posted by Brittex at 8:26 PM No comments:


On the 13th of May 2016, The CCIM Miami-Dade-Monroe district hosted its monthly luncheon at Morton’s Steakhouse (2333 Ponce De Leon Blvd), in Coral Gables.

For the second straight month, a sold-out crowd of 60 people including CCIM designees, CCIM candidates, lawyers, investors, mortgage brokers, and many guests were in attendance.  The special guest was criminal trial attorney, Jeffrey Feiler of the Feiler Law Firm, one of the foremost experts on the legalization of medical marijuana.

Mr. Feiler witnessed firsthand the complete development of this process during the legalization of medical marijuana in Colorado in 2010 and played a critical role in providing legal advice. Feiler’s involvement dates back to 2009 with the state of Colorado.

According to federal law, medical and recreational marijuana are illegal. However, the United States Department of Justice (DOJ) advised United States Attorneys not to prosecute individuals and businesses operating in compliance with state laws in those states with strong enforcement of their laws; furthermore, the memorandums addressed approximately eight activities that will not be tolerated by the federal government. For example, the sale to minors is prohibited. In other words, the legalization of marijuana has mostly become a state issue.

In 2016, Florida finds itself in a similar position to Colorado. It is becoming clear that the medical use of marijuana will be a specific industry. In addition, this industry encompasses many fields such as medicine, law, economics, ancillary businesses and of course commercial real estate. From a commercial real estate perspective, there are many concerns.


On November 2016, the Medical Marijuana Amendment, known as Amendment 2 will be on the presidential ballot.

Now it is Floridian’s time to decide.

Posted by Brittex at 9:26 PM No comments: